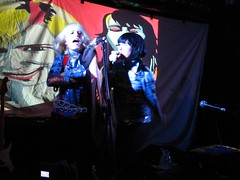 Last night, I rounded off the frantic week of gig-going with a visit to a night named Don't Look Down, at Barfly, to see Robots In Disguise. They were enjoyable, dancing around, mock-fighting, playing guitar and bass and singing over a backing track and visuals coming off a DVD. They were not unlike Chicks On Speed, or perhaps Le Tigre, in concept; one part crunchy rock riffs, one part danceable electronic sequences, and deliberately rough and unpolished vocals.

I can think of about 3 or 4 Melbourne bands I could see them on a bill with.

Did The Vivian Girls and Snap! Crakk! have the same vocalist by any chance?

There's not much you can squeeze into 80 minutes, so I had to leave a lot of things off. Doing a double CD would probably be a tad excessive, though. (And yes, I do have a good reason for putting on three ninetynine tracks and three Minimum Chips songs.)